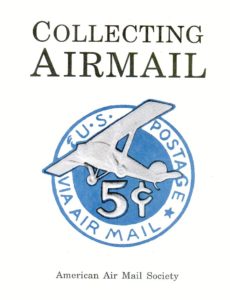 Airmail collectors, or aerophilatelists, come from all walks of life throughout the world. They all share a passion for aviation and its impact on worldwide communications. Many are pilots, work in the aircraft industry, serve in aviation in the armed forces, or have other direct connections to flight. Others were stamp collectors as children and returned to philately, now seeking a specialty that offers new challenges and knowledge. Some are advanced philatelists of a specific country who wish to research the rates and usages of the airmail stamps of their area of specialization. Yet others began collecting coins or postcards or antiques and discovered that in airmail collecting there is a greater opportunity to meet fellow collectors, exhibit collections, write about discoveries, and share enthusiasm. Museum curators and aviation history buffs find new approaches to their subjects in aerophilately. Whatever influences you toward collecting airmail, you will find great rewards; this area of concentration offers plenty of room for you to create a specialization that is tied to your interests or pursuits. This is a hobby full of fun and great, creative people!

Have a great time as you pilot your way through Collecting Airmail. The contents in this guide offer only an introduction to the possibilities of airmail collecting. The sky is the limit! Use your imagination. The members of the American Air Mail Society hope to meet you soon during one of your layovers!

Preparing for Takeoff
Introduces you to the basics of airmail:

Setting the Clock
Provides an overview of the chronological time frames for this past century of flight:

Surveying the Map
Allows you to plot a course by geographical region, route, or airline:

Navigating the Aircraft
Exposes you to some of the means of transport that have become collecting areas of specialization:

Scanning the Horizons
Guides you to additional possibilities for exploration: