The first officially sanctioned, fixed-wing, pioneer airmail flight took place over a five-mile route between Allahabad and Naini Junction in India on February 18, 1911. The event was held in conjunction with the United Provinces Industrial and Agricultural Exhibition and flown by the French aviator Henri Pequet.

Argentina, Denmark, Great Britain, Italy, Morocco, Norway, and the United States followed India that year into the airmail age after the Allahabad flight. Many countries had mail flown or prepared to be flown prior to the 1911 flight, but this mail was either not flown by fixed-wing aircraft, not flown at all, or not officially sanctioned by a postal entity.

Generally any item, especially if it is flown, representative of airmail prior to regular scheduled airmail service from any country is collectible. Most pioneer material is collected by country, pilot, or aircraft type.

As with any philatelic collecting area, some items can be difficult or expensive to attain. However, research and knowledge in specific area(s) of collecting interest have netted collectors many previously unknown items, supporting the fact that knowledge reaps results.

Those who elect to collect material from the pioneer era of any country experience one of the most colorful periods of aerophilately, when each flight was an adventure, and each success a cause for celebration. 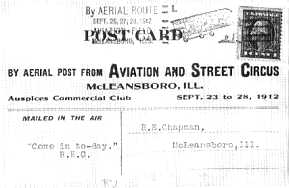 Horace Kearney was the pilot for the airmail flights during the three day Illinois Aviation Meet and Street Circus held in 1912 in McLeansboro, Illinois.

The world began to shrink again and the airplane and airmail were a part of the revolution. The early stages of the developmental period were characterized by pioneer efforts and experiments in many parts of the world. In the United States we saw the beginning of regular point-to-point air service and the creation of a vast network of air routes. The latter stages saw the first efforts at crossing the great oceans with regular service, although foreign flights into the Caribbean basin and South America had come much earlier. The last years of the era showed the whole system stressed by war and the remarkable efforts to work around the chaos.

The developmental period in some foreign nations was much like that of the United States, linking distant or hard-to-reach places with increasingly speedy and reliable air service. In other places, such as Britain and the Netherlands, the developmental period was an effort to link far-flung sections of their empires, combining both national and international features.

The American Air Mail Catalogue is indispensable for chronicling the efforts of American carriers. Foreign flights and foreign carriers are more fully covered in the older Muller catalogue and in specialized national catalogues. Important monographs exist in many areas. A relatively unexplored collecting possibility is seeking mail of foreign origin carried on the first flights of another nation.

A more recent trend is fitting airmail into the postal history of the 20th century. This recognizes the role the airplane and its mail have had in this century. Regular commercial mail often plays an important part in telling this story. Collectors are moving beyond the catalogued first flights to study mail that shows any air service. A cover carried by air over established routes only for a portion of its journey is often more revealing of the developmental aspects of air service for the period.

Inevitably linked to the process are the advancements in aircraft and air technology. Traditional collectors have always collected covers conveyed by various types of craft. Controversy arises when the focus shifts too heavily to the role the craft itself plays in speeding the mails. The transoceanic efforts at the end of the era were particularly indebted to the development of powerful long-range war planes. Similar issues arise for land-based versus sea-based planes and lead eventually to transoceanic and intercontinental flights to non-coastal cities. You can find diverse material to chronicle these developments. Exhibitors may very legitimately pursue the story through topical and thematic approaches.

Many nations, of course, have commemorated with postal issues both the personalities and equipment that transformed the 20th century. If you have a special interest in stamps rather than covers you may find this a fruitful area. A collection that links an original, historic flight cover with a later commemorative stamp issue can be especially challenging. A much neglected area is the air letter sheet both in its own right and as a weight reduction effort.

In an era like the present when air service has become the norm and fewer contemporary first flight covers are available, reworking the material of the developmental period in newer ways opens limitless possibilities. 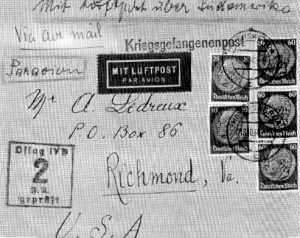 French officer prisoner of war mail, October 1940, from Germany to the United States routed via South America and the Italian transatlantic service LATI paying only the expensive air supplement of 215 Reich pfennigs. The clipper from Lisbon would have been just 40 Reich pfennigs. Covers demonstrating multiple interests challenge the researcher.

The Modern Period after 1945

U.S. first flight cover collecting in the post World War II era can be divided into two periods, before deregulation and after deregulation. The era saw tremendous growth in the airline industry with a more mobile society, new domestic and international routes being inaugurated, and new airlines being formed. Also the introduction of the commercial jet made travel by air more convenient and reliable.

After the deregulation of the domestic airline industry in December 1978, there was an influx of low cost carriers bringing low fares and convenient service to many markets. These new “no frills” airlines provided much needed competition to the established carriers whose operating costs were higher, sadly, resulting in the demise of such companies as Eastern, Braniff, and Pan American World Airways. Other established carriers – Piedmont, Ozark, Pacific Coast, Mohawk – were absorbed into larger carriers, with air travel in the United States today being controlled by American, Continental, Northwest, TWA, United, and USAir. Many of the low-cost carriers did not survive, and the formation of others continues with some surviving and others operating for only a short time.

One of the results of deregulation was the dropping of subsidies provided by the United States Post Office to the airlines carrying the mail. Prior to deregulation the airlines were paid more to carry a letter than the post office collected in postage. This allowed the airlines to operate on routes where there were lower profits and less traffic. After deregulation, the airlines were allowed to establish routes to more heavily travelled markets and drop routes to the lower profit cities. These actions left many cities without regular airline service, a situation which was remedied by the establishment of commuter airlines.

All of these events are well documented through the use of first flight covers. Types of covers most favored by the collector are Contract Air Mail (CAM) until deregulation December 1, 1978; Foreign Air Mail (FAM) until December 7, 1978; First Flights by United States Airlines (FFUS) after deregulation; Foreign Flag Flights (FFF) since the entry of international airlines into the U.S. market; Jet covers; and Supersonic Transport (SST) flight covers.

Until 1994 in the U.S., the post office supported airmail collectors by providing official recognition for many flight covers; in many cases a cachet was applied to envelopes sent by collectors to the applicable post office servicing a new route or service. After deregulation, many new routes went unrecognized by postal authorities as individual airlines either chose not to request the recognition or did not have sufficient time to make a request. Official flights were announced in The Postal Bulletin. Some collectors were able to seek out information and service mail on unofficial flights.

The United States Postal Service support for official flights ended in 1994, although in other parts of the world the support by local postal authorities continues. Subsequent to this decision, the number of covers flown on new routes and services by United States airlines has decreased substantially. You must seek out the new routes by checking newspapers, travel publications, and aviation specialty magazines. The excitement of first flight cover collecting is still there, as many local offices will honor your request to have envelopes placed on the aircraft making the inaugural flight. The thrill of having your covers flown on that new flight is quite rewarding! 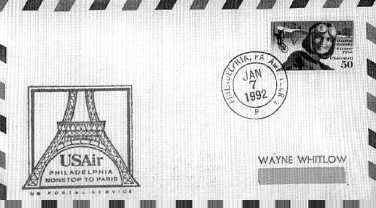 First flight cover, flown from Philadelphia to Paris by USAir, with an official postal cachet.