One of the most natural ways of collecting stamps and covers is to choose a country and begin to collect its stamps from the first issue until the present day. This collecting strategy sometimes leads to studying the postal history of the country through the markings found on entire covers.

Americans often collect United States stamps and covers or postal material from a neighboring country such as Canada or Mexico, or from the country from which their grandparents originated. In any case, choosing a country to collect allows you to narrow the often bewildering possibilities that are offered to you.

The history of flight and airmail involves almost every country in the world. Zeppelins carried mail from the beginning of the century until the late 1930s, and later flights carried mail from many nations all over the world. Mail was flown officially by airplane beginning in February, 1911 at Allahabad, India. While obtaining mail from some of these flights may be a bit expensive, you can start a collection of early airmail from many countries for only a modest outlay.

Even narrowing your airmail collecting interests to one country or a country with colonies may require that you narrow that interest still further in order to have a reasonable chance at building a complete collection. The early major airmail nations of the world, such as the United States, Britain, Italy, Germany, and France, produced a great many flights on which collectible mail was flown. To acquire examples of mail from all or most of those flights is not only quite costly, but virtually impossible. However, there are alternatives. One example is mail flown on the 1926 airmail routes established in Italy. Italy issued the world’s first airmail stamp in 1918. By 1926 Italy had developed a national air service that carried passengers and mail to all of that country’s major cities. The service began on April 1, 1926, with a flight from Turin to Pavia to Venice to Trieste. The various stops among those four cities produced some thirteen different legs of the journey made between April 1 and 6. On April 7, a flight was made between Rome and Genoa, and between Rome, Naples, and Palermo. This produced ten more first flights.

Covers exist which were carried on the first flight made to each of these cities. They were flown in sufficient numbers so that today they are not terribly expensive. If you acquired all twenty-three covers, the result would be a mini-collection representing a significant piece of Italian airmail history. Similar collections can be made for other countries by concentrating on their airmail flight history. 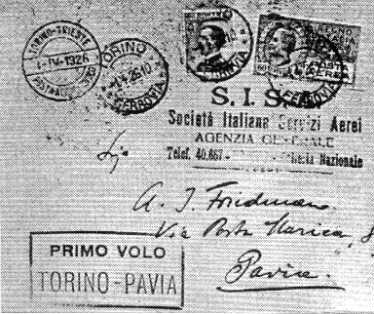 The birth of commercial airline development in the world is easily traced to the end of World War I. Wartime research and development had improved the performance of the airplane to a practical, although somewhat imperfect, means of transport. The intercontinental airlines of Great Britain, the Netherlands, and France developed consistently with a desire to link up to their scattered territories, increase national prestige, and spread national propaganda – political, cultural, and commercial. France, via the development of its routes to the west coast of Africa, eyed the east coast of South America. Argentina was at the time the most prosperous and developed country, and its capital, Buenos Aires, the “Paris of South America.”

France started survey flights in Brazil as early as 1925 and would eventually develop a “line” which ran down the coast of Brazil from Natal to Rio de Janeiro and, finally, Buenos Aires. At the same time, the German aircraft industry, searching for new markets, had already entered Colombia and Bolivia and then Brazil. Most of these countries had large German populations which were supportive of the development that the local governments were unable to provide, and which could offer incentives in terms of mail contracts to foster links with remote populations otherwise unconnected by either paved roads or railway lines. Most of Brazil’s major cities were along the coast, and hydroplanes were the obvious answer. The vast interior would be developed as the aircraft was improved in performance and support facilities were provided.

With the help of a suitable atlas, an encyclopedia and/or history of the countries involved, and other reference material including books like R.E.G. Davies’ Airlines of Latin America since 1919 and Airlines of the United States since 1914, books on aircraft of the day, which provide information on the capacity and range of the equipment, and philatelic references in magazines, books, and catalogues like those of the AAMS, you will find new meaning to your collection. Many of the early pioneers have documented their ventures. General magazines like National Geographic can provide exciting visuals which contribute to an understanding, especially if you can mentally transpose the image to an earlier time.

For the early days it is necessary to dismiss the idea of pressurized cabins and non- stop jet service of today and picture open cockpits, cramped seats, and minimal, if any, navigation equipment. First flights were often “hops” and limited to connections between established or larger communities. As time, equipment, and facilities progressed, you learn to appreciate the contribution of the early pioneers in the development of routes of communication via airmail. 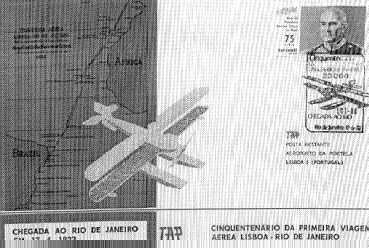 The 1922 airmail route from Lisbon to Brazil is commemorated on this anniversary souvenir cover.

You can collect by an airline or by an aviation service, such as the army or navy, or even by the aircraft manufacturer. An airline is defined as a system furnishing air transport, usually scheduled, between specified points. The world’s first scheduled air service began operation in Florida in 1914, as the St. Petersburg Ð Tampa Airboat Line. Since that time many airlines have been inaugurated around the world, with most of them either going out of business or merging with other smaller airlines to form larger airlines.

Some of the more recognizable foreign airlines through the years have been Air France, KLM, Imperial, C.N.A.C., Qantas, and Lufthansa. If you have ever been to a large airport, you probably have seen just a handful of the airlines operating in this country, such as American Airlines, Northwest, United, TWA, Continental, and Midwest Express. Other airlines, such as North Central, Pacific Marine Airways, Pacific Air Lines, and Pan American Airways, have disappeared through the years.

An example of one airline is Pan American Airways and its service to the Pacific Ocean. The two airplane manufacturers for Pan American were Sikorsky and Boeing. Survey flightswere conducted from April to October of 1935 to several islands in the Pacific. Service was inaugurated in November of 1935 with stops at Hawaii, Midway, Wake, Guam, and the Philippines. Regular passenger service began in late 1936, with service extended to Hong Kong in 1937. South Pacific service by Pan American Airways began with survey flights in late 1937 and then again in 1939. Service was inaugurated in July of 1940 and included stops at Canton Island and New Caledonia, ending in New Zealand. Fiji was added in November of 1941. Service was discontinued on December 7, 1941 and resumed again in 1945.

Airmail collecting can be as simple or as specialized as any other form of stamp and cover collecting. You could try and collect all the first flights from Pan American Airways, or specialize by concentrating on the development of airmail service to the Pacific by Pan American Airways. Airmail collectors need to acquire special books, catalogues, and reference materials to better understand and appreciate their collecting area. Information can be acquired through the American Air Mail Catalogues, books such as Davies’ Airlines of the United States since 1914, and journals such as the AAMS publications The Airpost Journal and Jack Knight Air Log 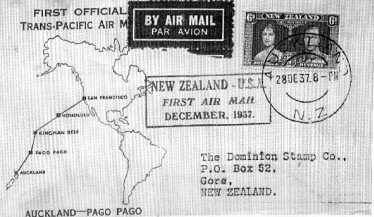