The US Post Office published a listing of rates and schedules for outgoing Foreign Air Mail for most countries in the world.
FAMS 1935 Foreign Air Mail Service Bulletin USPO 1935 through 1939
FAMS 1936
FAMS 1937
FAMS 1938
FAMS 1939

In addition, Postal Digest Co. published a monthly guide known as the Official Foreign Air Mail Guide, that provided detailed listings of air mail service to the world from the U.S. and from the world to the U.S.  This publication ran from 1940 through 1947. It started as a monthly and ended as a quarterly. The APRL has an issue for 1944. A complete collection is held at the New York Public Library. Issues can be obtained for a copy fee. 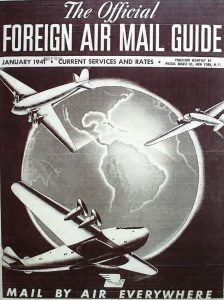 A summary of Canadian Air Mail Rates was included in the sixth edition of the American Air Mail Catalog series. That summary was expanded for the seventh edition, which at this writing is still in preparation.  Also, an earlier summary of air mail rates for Newfoundland was revised. Note: these publications are listed on this website at Resources/Publications/Canada 1st Edition