Flown covers connected to important events in the development of aviation and airmail services.  Many of these covers were unofficial, prepared by other than postal authorities, for experimental or pathfinder flights in various countries or regions. Many were produced in limited quantities, available at short notice.  Such covers are scarce.  Many have been signed by the participating pilots making them more desirable. 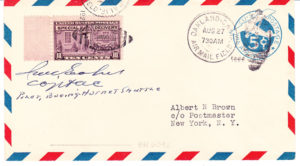 Souvenir Historical flights often cross many collecting areas, giving them a demand far exceeding one classification.  One example is the 1928 February to May, South American Test Flights.   Collectors of US Army flights, Jimmy Doolittle autographs, airmails from Peru, Bolivia, Chile, Argentina and Paraguay might want these covers.

Unlike most other areas of airmail collecting, these flights could continue as other experimental flights are accomplished.   Events such as the 1983 Space Shuttle 8 flight which carried 260,000 covers for the US Postal Service and the 1986 Voyager flight by pilots Burt Rutan and Jeana Yeager are more modern examples.