Collecting aircraft on stamps is, arguably, a topical pursuit outside the realm of airmail. But a subdivision of the topic, stamps showing airplanes that carried mail, tells a dramatic story of technical achievement that within a single decade transformed the aerial transportation of mail from stunt status to scheduled flights.

Starting with the Sommer-type biplane that carried the first-ever airmail in India to today’s jet transports, the aviation part of airmail can be shown in dramatic fashion by stamps. Where a particular airplane doesn’t exist on a stamp, you may find it on a pictorial postmark or a first flight cover cachet. You can further expand the scope of such a collection by including airships, balloons, helicopters, gliders, or even pigeons.

Another approach is to specialize in a particular type of aircraft. Take, for example, seaplanes on stamps. Without them, airmail service to Central and South America and across the Atlantic and Pacific Oceans would have waited until airports were built capable of handling large land planes.

Mail-carrying seaplanes immediately bring to mind the Pan Am flying boats. These include the Sikorsky S-38, -40, and -42 widely used in the Caribbean and South America, the Martin M-130 China Clipper which flew the first Pacific airmail service and the greatest of them all, the Boeing 314 used for transatlantic flights to England and France. Most of these aircraft appear on stamps. Covers flown on them are relatively inexpensive and add a dimension of postal history. Foreign mail-carrying seaplanes include Imperial Airways’ Short flying boats, Condor’s Dornier Wal and Lufthansa’s 12-engined Do-X.

Two other areas of specialization are the LZ127 Graf Zeppelin and the supersonic Concorde. Both appear on many stamps, and collections of them may be spiced with flown covers.

Flown covers tell only part of the story of airmail. Collectors of aircraft on stamps may wish to sing this paraphrase of a song Maurice Chevalier made famous, “Thank heaven for airplanes. Without them what would airmail do?” 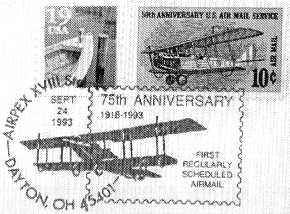 Pictorial postmarks add a new dimension to collecting airplanes on stamps. The Curtiss Jenny, shown on this postmark and stamp, was used to inaugurate the world’s first regular airmail system in 1918.

Unlike the theoretical sciences, aviation depends on human daring as well as genius. The pioneers of aviation, with their primitive skills, risked their lives with every flight. Later pilots flew the designs of others but applied their skill and nerve to test the reliability and extend the utility of their airplanes. Intermixed in this history is the carrying of airmail by famous pilots such as Charles Lindbergh and Jack Knight and hundreds of lesser known fliers, including many who autographed souvenir mail. Today, philatelists interested in the people that made aviation happen have a rich field from which to draw.

Although the first names that come to mind when considering personalities in aviation are Orville and Wilbur Wright, aviation on stamps can be traced back to mythology with Icarus and his wings of wax and feathers. Then there is Leonardo Da Vinci, the first aeronautical engineer. Don’t forget Otto Lilienthal who with 2,000 glider flights founded the science of aerodynamics. All are honored on stamps and covers.

Collecting “women in aviation” is an example of an aviator specialty that can be a great deal of fun without being expensive. It is worldwide in scope depending upon your area of interest and need not be limited to pilots as a subject. In 1995 Ellen Collins commanded the space mission to link up with the Russian Mir. On that flight Janet Voss was also aboard. Cards or covers with the Mir docking cancellation could be sent to these astronauts for autographs. These items added to the $10.75 Endeavour lift off stamp tell a story in one’s collection.

Postcards and stamps from many countries, as well as flown and commemorative covers exist to expand your topic. Reasonably priced material that may be found at stamp shows include Jackie Cochran’s flight cover from Jamestown, Virginia, to New York; New Zealand stamps issued honoring Jean Batten; and souvenirs of Amelia Earhart’s take-off for her round-the-world flight.

While “women in aviation” may seem to be a narrow topic, you may refine the subject further, for example, balloonists, early birds, air racers, barnstormers, manufacturing, record setters, over the oceans, around the world, carrying the mail, commercial airline pilots, flight attendants, women at war, space, passengers, organizations, and famous pilots.

Carry envelopes to be signed when you fly or visit air shows. Search everything at a dealer’s table as “aviators” will not likely be listed with its own category for easy pickings. That often makes the challenge of finding items more rewarding. 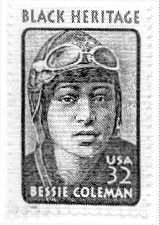 Astrophilately is based on a chronologic philatelic study of the historical, technical, and scientific aspects related to space research, programs, and their development. While its “theme” is always “space related,” it does not really develop a “space theme,” but is rather a chronologic study of a particular segment, for example Project Mercury, with its excitement as man moved into the threshold of space, to the increasing daring ventures of Gemini and Apollo culminating with the epochal “Event of the Century,” when Apollo 11 Commander Astronaut Neil Armstrong announced to the world as he stepped on the Moon, “That’s one small step for man; one giant leap for mankind!”

The astrophilatelic approach records through philatelic material, the chronological documentation of both scientific and technical aspects of the space program being shown. The emphases are those of the appropriate time, date, and place of the postal chronology, shown by official government-sponsored cachets, as well as regular and special postmarks.

In astrophilately, very often the stamps on the covers shown are ordinary issues, not in any way related to the space theme. Furthermore, the postmark shown may only be a regular cancellation date stamp, not tied into any theme development. What matters only is that the cover utilizes correctly by time, date, and place a direct relevance to the chronology and historicity of the events being developed. 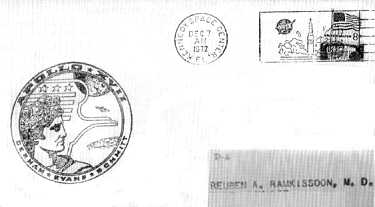 The Apollo 17 launch cover illustrates important aspects of astrophilately, including the Kennedy Space Center Official cachet, issued and applied by the post office, which is preferred over other cachets; the launch site, Kennedy Space Center, is correctly shown by the postmark of the closest postal facility to the launch complex; the correct date of December 7, 1972; the time of AM; and an addressed cover with the correct rate of postage.

Collectors of airmail material, known as aerophilatelists, are some of the most prolific exhibitors in the world. One or more airmail exhibits can be seen at most any stamp exhibition in the United States, and an entire section is reserved at international shows for aerophilatelic and astrophilatelic exhibits.

There are many opportunities to exhibit your favorite aerophilatelic material in this country. First-time exhibitors should aim towards a local or regional show near where they live. Much experience can be gained from exhibiting at this level. These shows typically award gold, silver, and bronze medals, although variations exist. After you have learned more about exhibiting you may wish to show your material at the national level. There are over thirty national stamp shows in the United States, and anyone may apply to exhibit at any of these shows. Five medal levels are awarded. Standards are much higher than at the local shows. Awards are assigned using guidelines published by the American Philatelic Society. These guidelines may be found in the Manual of Philatelic Judging available from the APS, P.O. Box 8000, State College PA 16803.

The American Air Mail Society supports two exhibitions each year, usually at national level stamp shows. At these exhibitions anywhere from 10 to 25 airmail exhibits will be on display. Attendance at one or more of the AAMS national meetings is a great way to see what other aerophilatelists are exhibiting, and what techniques they are using. At these shows the American Air Mail Society provides a complete range of awards, in addition to the show awards.

Once a vermeil medal is won at a national level show, you may try international exhibiting. There is a special class for aero and astro-philately at all internationals supported by the Federation Internationale de Philatelie (FIP). A whole new set of rules governs exhibiting at this level, where eight levels of awards are given.

Other worldwide aerophilatelic exhibitions, from non-competitive to international level, are under the auspices of the International Federation of Aero-Philatelic Societies (FISA) and offer a chance to exhibit and view exceptional air mail items.

A standard frame in the United States holds sixteen 8 1/2 by 11 inch pages. Exhibits usually are comprised of one to ten frames. An exhibit must tell a story, having a beginning and an ending with a logical sequence in between. Much fun can be had putting together an exhibit using philatelic material in your collection. Research can be done, and new discoveries can be made, which adds to the enjoyment.

As you get further into collecting airmails you should try exhibiting. It will add immeasurably to your hobby pleasure. There is nothing like seeing your material in frames at a stamp show and discussing your area with viewers. The joys of exhibiting are many, including the friendships developed in front of the frames.

For information on AAMS awards which are presented to exhibitors of airmail at local & national stamp exhibitions, and at AAMS meetings and conventions, see the American Air Mail Awards (link to be updated later)