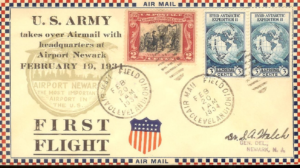 After AACMO was operating on schedule, more crashes and loss of life halted mail flying on March 11th.   A ‘time out’ gave the Army a chance to better train pilots, improve operational procedures and improve equipment on airplanes.   AACMO resumed March 19th over the same routes (a few were modified for efficiency).   April 8th, segments of the old CAM 9 Route were added to AACMO.  New contract routes were announced for bid in March.  When they were awarded, the Army began handing over to the new contractors on a route by route basis, starting on May 8th, ending AACMO on May 30th.  The Army flew over 750,000 pounds of mail in 78 days of operation, but experienced 66 major accidents and 13 deaths.

Collectible AACMO covers include the first flights, February 19/20 and April 8, Crash covers, pilot signed covers, resumption flights on 19 March, and last flights starting 8 May.  Since POD and airline contractor support to aerophilatelic hobbyists was not a top priority for the Army, collector covers, particularly pilot signed covers, are scarcer than similar CAM or AM items.  Collectors and cover preparers faced difficult challenges with over a hundred directional short-notice first flights occurring in a two day period.  Therefore, Philatelic mail concentrated on the main hubs, rather than the smaller mid-route stops.  Official POD cachets were not issued because of the short timelines.  A few cover servicers and collector groups added rubber stamp cachets to the Army mail.