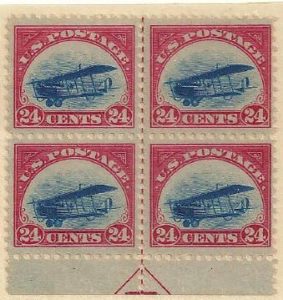 To commemorate the 100 year anniversary of the first United States Airmail Stamp, this presentation includes the production history of the 24ct “Jenny”, (Scott C3/C3a) showing printing varieties, early flight cancellations, and various related period material including photos. It presents most of the material shown in the 5 frame exhibit but continues to include the next two United States Airmail Stamps, the 16ct and 6ct “Jenny” stamps. The initial 24 cent rate (C3) began on May 15, 1918. The rate was reduced to 16 cents (C2) on July 15, 1918 and again reduced to 6 cents (C1) on December 1, 1918.